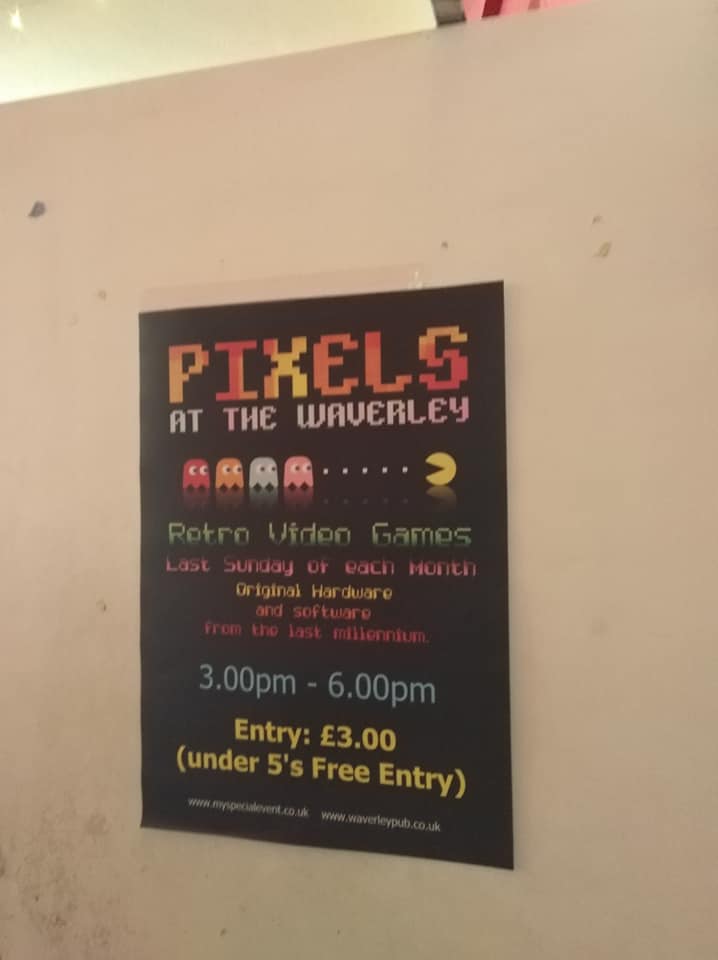 Pixels at The Waverley kicked off on Sunday 24th February at The Waverley in Bognor Regis. It was a little success with around 60 people turning up for the event. The pub had a busy day with a lot of people staying out front to bask in the glorious sunshine as this is a rare sight for February. A live band was playing for peoples entertainment and those who did venture into the back function room spent up to 3 hours having fun with many different retro video games. With under 5’s getting in free, many gamer’s and nongamers brought their families to the event so all could get involved.

My Special Event along with Jan Pniewski (who was helping to run the event and is Zoe’s husband) set out a variety of different consoles and games for those who attended this new event. Some of the consoles dated back over 30 years and have been collected by Jan over the years or donated to him.

Consoles included Sega MegaDrive, Nintendo SNES, Amiga, Amstrad, Playstations 1 and 2, Commodore, Raspberry Pi Emulations and Binatone along with many more. These consoles will be available at future events and will be swapped around to make it more interesting for players. As the first event of its kind in Bognor this is a learning curve for all those involved as to what will work and what may need tweaking slightly.

There was a huge variety of games available to play and the helpers at the event were on hand to swap the games around when asked.

Some people came and went and came back as this event gave them the opportunity to be flexible. Once your entry fee of £3 was given you had a wristband (see photo above) for the event which meant you could come in and out of the event within the 3 hours. Many people came in played for a short while then went to the front of house to grab a drink, bite to eat or watch the band then come back.

My Special Event asked several of its attendees to fill out a feedback form. This enables My Special Event to evaluate how the event went and what was a success and what needed working on. The next is event is at the end of March so it is important to take all the comments on board and make the playing experience next month even better than the previous one.

Pixels At The Waverley Next Month – March Event

Next months event coincides with Mothers Day, therefore My Special Event are tying it in with a special Mothers Day Promotion. Anyone coming to the event who brings their mother…Mums get in for FREE!!!

We are hoping this incentive will bring more people to the event.

Update on Pixels At The Waverley

October 2019 – Since writing this Blog back in February/March for the Pixels at The Waverley, Pixels at The Waverley has taken a little break. We are looking into other ideas at the moment as we feel we can bring something bigger and better to Bognor Regis for all those avid gamers and nongamers out there. My Special Event ia always looking for new ideas and suggestions, especially when it comes to Pixels and Retro Video Gaming. With the growing trend in Internet Cafes and other Retro Video Gaming Cafes slowly popping up around Portsmouth and other towns, we would like to bring something unique to Bognor. We have promised that we will bring back Pixels in the future and have been investigating some time at present in personal Pixels Parties and possible Build your Own Pixels Corporate Events. As with any event these take time, to carry out research for the right market and to get the right venue and equipment for these sessions.

If you want to find out more